Welcome to the first article! Enjoy!

To understand what this blog is about, please click here before reading

If you thought the “I keep letting you back in” part in ‘Nice For What’ by Drake was something new, then you obviously haven’t heard of the iconic Ms Lauryn Hill. My favourite songs: Lost Ones/To Zion/Nothing Even Matters.

How talented is Lauryn Hill?

Few artists’ debut solo album is as iconic as Ms Hill’s. Even before this album, Ms Hill was doing incredibly well with the Fugees. Said album – ‘The Miseducation of Lauryn Hill’ (MOLH), features passion from Ms Hill’s raw voice (the type that gives you goose-bumps), cohesiveness (something I really enjoy – when an album feels like a complete package) with the instrumentals pleasing to the ear and complementing Ms Hill’s voice so well.

The success of MOLH is undisputed: achieving the #1 spot on the BillBoard 200 and breaking the first week sales record for a female artist (which Cardi B recently broke). With the music industry’s current focus on streams, likes & views, these numbers are important, but something I want to encourage is thinking beyond the numbers. Don’t just accept a #1 song as amazing, examine it and conclude for yourself whether it should be #1 and why, and if it shouldn’t be there, how do you think it got there? (If you are confused as to why else it could have got to #1, please click here)

To understand the legacy of MOLH, let’s examine three statements:

“the breakthrough recording that fuses soul, rhythm and blues, rap and reggae” (Library of Congress, 2015)

Ms Hill said that “music [was] about to change” and “people [could play] with the parameters” (Checkoway, 2008), and she was right. Maloney (2017) deemed the album “progressive” and it’s attributed to making hip-hop and neo-soul mainstream. Ms Hill took “artistic statements, musical elements and cultural messages” and “[melded]” them together (Blau, 2013) while critiquing contemporary hip-hop culture, creating an album which hasn’t “wavered in popularity in 20 years” (Maloney, 2017).

“one of the most incredible albums ever made” – Mary J Blige (Checkoway, 2008)

Technology is believed to have made everything ‘better’, so you might expect the above statement to be for an album that heavily incorporated technology. But, something I want to explore on this platform is whether our heavy technological use could impact music quality, like removing emotional connections (explored in more detail here). This leads to an important issue: whether the music industry can survive the technology and streaming era.

Ms Hill believed a “computer’s too perfect” but “human element[s]…make the hair on the back of [her] neck stand up” (Checkoway, 2008), so shares similar thoughts. The result of  her humanistic approach, for me, is feeling an emotional connection with MOLH, especially with raw themes like “spirituality” (Blau, 2013) and pregnancy (cue: To Zion). Maloney felt compelled to “buy…from real people in a real store” (2017), and the significance of doing this is something I discussed recently here.

By exploring other artists past and current, I want to build on this idea, and see whether technology could have removed our emotional connections with music and in the future, if the music industry will collapse as a result.

Ms Hill challenged her industry (and world) wherein women are given a back seat and told they can’t. Alongside being mostly credited for producing, writing and arranging MOLH (despite disputes on the matter), she wanted to redefine women’s’ societal role and incorporate feminism in her work. In ‘Doo Wop – That Thing’, Ms Hill calls for women to be more than sex, and a man’s property (O’Neill, 2016).

Maloney (2017) refers to MOLH as a “definitive cultural touchstone”, and it has “influenced a generation of soul and hip-hop artists” (Mary J Blige, Checkoway, 2008) like Amy Winehouse, Adele and Nicki Minaj. And look at these statistics: at 23 years old, Ms Hill was on the cover of Time, joining 17 other black cover stars throughout the 1990s (17/527 covers). 5/17 were in arts and entertainment, but 1/17 was a musician, and this was Lauryn Hill (Blau, 2013). Ms Hill shows that women CAN thrive independently, while loudly targeting one of the ethical issues of the music industry.

What role did social media play in her music – is she a Tweeter?

However, Lauryn is still in the industry today, in a time where social media usage is at 2.4bn in 2017 and expected to grow to 3.02bn by 2021 (Statista). Even though I have questioned social media music marketing, this is a cheap and far-reaching  promotion method, so no wonder Ms Hill launched Twitter and Facebook accounts. As for affiliated accounts, I found her label, who don’t tweet that often. Ms Hill doesn’t have an Instagram page, but alludes to a possibility of this in the future (Vibe, 2015). 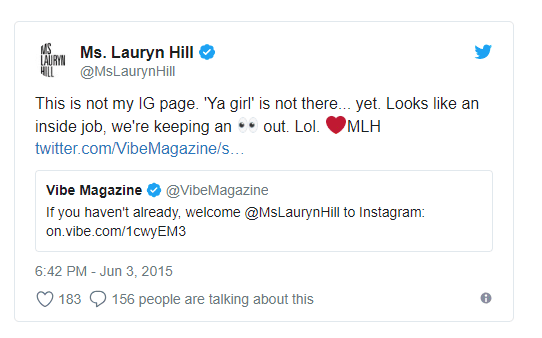 Can she be considered a ‘Tweeter’? For me, this answer seems clear: Ms Hill’s career and legacy was solidified long before 2012 when her ‘tweeting’ started. Social media was not an option when she launched the album, either.

What is unique about Lauryn Hill?

Only having one main album, that not only got to #1 but achieved something outside of its chart ranking.

An album that stays at number #1 for weeks but isn’t doing much outside of the charts (in terms of making statements, starting a movement) doesn’t make sense for me, as music represents our current situations (see here and here for more detail). Albums that do this are an example of concerns that the music industry is a) failing, b) corrupt and c) dying.

What other album could have “religious congregations [working] her songs into their services” (Blau, 2013)?